Starbucks withdraws its 2020 financial forecast, and more than 95% of stores in China open

On April 8, local time in the United States, Kevin Johnson and CFO Pat Grismer, President and CEO of Starbucks Coffee Company, issued an open letter to shareholders. Due to the stagnation of performance caused by the earlier epidemic, the Chinese market had a negative impact on Starbucks' earnings per share of 15 to 18 cents, plus the impact of the US market, Starbucks withdrew its original 2020 performance expectations. 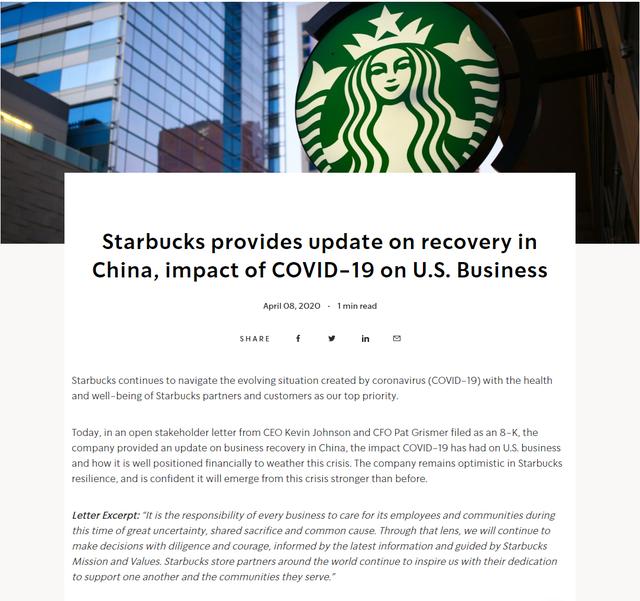 Starbucks withdraws its 2020 financial forecast, and more than 95% of stores in China open

Under the influence of the new coronary pneumonia epidemic, Starbucks delayed its store opening plan in China. In late March, Starbucks opened two new stores, including the Shenzhen Starbucks Coffee Express ™ concept store. At present, Starbucks' business in China is gradually recovering, and more than 95% of its stores have resumed business. With the gradual recovery of the Chinese market, the proportion of shop orders compared to mobile phone orders is increasing. Starbucks expects that business will be fully restored in the next two quarters.

Earlier, Starbucks expects revenue to grow 6% to 8% in fiscal 2020, and global same-store sales are expected to grow 3% to 4%. After withdrawing the disclosure of financial expectations, Starbucks shares fell 2%. As of now, Starbucks shares have fallen 15.58% this year.

In the US market, the new crown epidemic occurred in March from attention to outbreak time. As of March 11, Starbucks' same-store sales in the United States showed an increase in the first quarter. Same store sales increased by 8% year-on-year, and same-store transaction volume increased by 4% year-on-year, the best results in the same period in four years. But from March 12, Starbucks America's performance began to be affected by the epidemic, and by the last week of March, Starbucks America's same-store sales fell more than 60%.

Starbucks said in an open letter, "We are fully financially capable of meeting current challenges. We still believe that these special circumstances are temporary, and we expect Starbucks to emerge from this global crisis and be stronger than before."

Affirmation: If the article or the transfer article involves copyright issues, please contact us in time, we will deal with it as soon as possible!